These site uses cookies, by continuing to browse the site you are agreeing to our use of cookies. Find out more here.

TECHNAL and you
Preferences 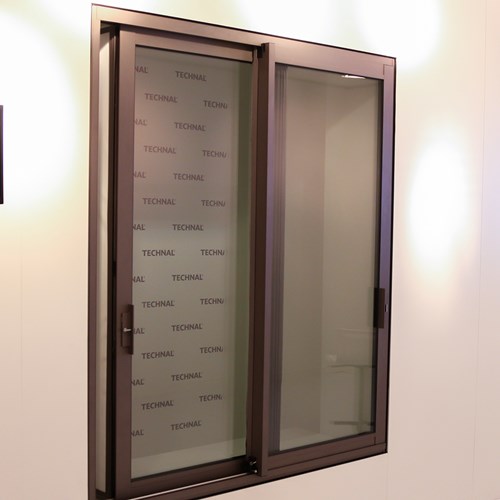 Today you can open a window but keep out the noise

The ACTIVE ACOUSTIC WINDOW is a real innovation for occupants wishing to ventilate their interiors while protecting themselves against outside noise. This sliding joinery system provides acoustic insulation against airborne noise even when open. Its patented system, developed in partnership with the Gamba Acoustique Group and the Mechanical and Acoustic Laboratory of the CNRS (French National Centre for Scientific Research) is based on the combination of "active" and "passive" technologies. These complementary technologies treat the entire frequency spectrum: between 500 and 4000 Hz for the passive technology and between 80 and 500 Hz for the active technology. For a window with a 10 cm opening and 44.2/14/10 acoustic glazing, this reduction can reach 25 dB, i.e. on average 300 times less noise inside. No more need to close the windows in warm weather, even in the city center or near a main highway! The "active/passive" system is totally integrated into the aluminum profiles which are similar in style to a traditional joinery system.

The system was developed and tested on a leaf open by 10 cm compatible with the anti-defenestration safety standards. To absorb the noise, this opening or "slot" has two side walls which create a tunnel producing a silencing effect. These side walls are made of an acoustic insulation material (mineral wool 6 to 20 cm thick and around 25 cm deep) placed on the outer mullions of the opening frame and the fixed frame mullion. When sound enters this silencer it is absorbed by the walls as it travels through. The noise is reduced in the medium and high frequencies which correspond to high-pitched sounds such as voices.

Sound is a pressure wave, consisting of "peaks" and "troughs", which spreads through the air like waves on the surface of water. The principle of the active technology is to sense this wave, analyze it in real time and then generate its inverse. This counter-wave is emitted onto the incident wave and the "peaks" and "troughs" cancel each other out. The initial sound and the inverse sound cancel each other out, reducing the noise. Microphones record the incident sound passing through the tunnel. It is analyzed by a computer which produces the counter-sound which is emitted through speakers*. This system monitors the sounds and cancels out low frequencies (low-pitched noise). The computer runs an active check algorithm (filtered reference) to optimize the control signals sent to each speaker.